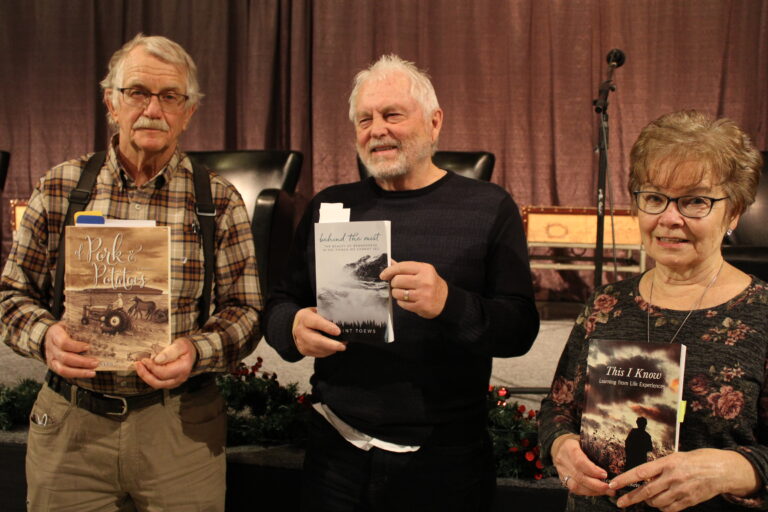 Dear friends and relatives
Please accept this invitation to the “meet the authors evening” being held at the Mennonite heritage village 7:00 PM December 2nd 2021.  Bill is one of three authors being featured that evening with his book “of Pork & Potatoes.

The evening begins with introductions of the authors on stage.  Each author will be  introduced in turn, have 20 minutes to say a few words and read a section from their book.

There will be an opportunity to ask questions and the evening will end with a chance for folks to purchase books and have them signed.
It is a simple relaxing evening generally and most folks just enjoy being able to get out and chat with like minded people!  Due to current regulations, the event will be open only to those double vaccinated against the Covid virus and proof of vaccination will be required.

Looking forward to having you join us for an interesting evening!

Here is an article about me speaking on Hog Barn 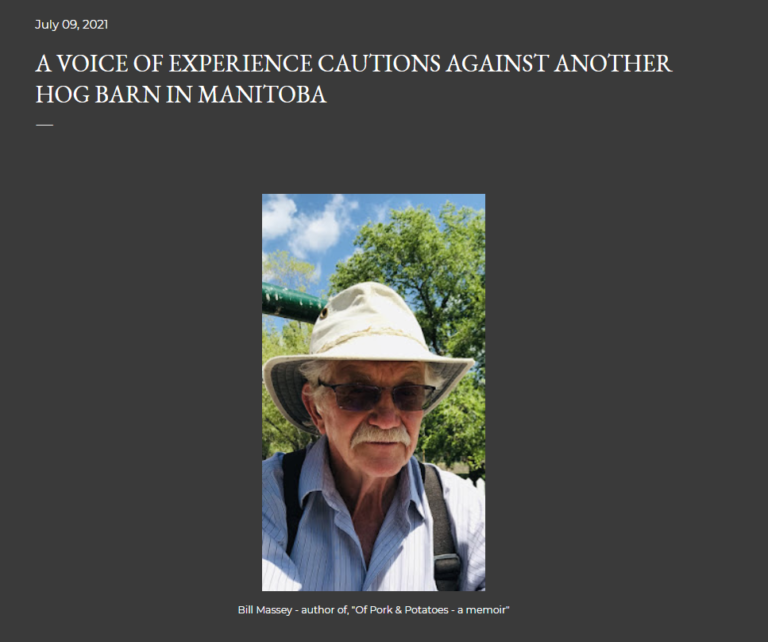 A VOICE OF EXPERIENCE CAUTIONS AGAINST ANOTHER HOG BARN IN MANITOBA

Massey made the presentation, below, to a Conditional Use Hearing at the RM of Westlake-Gladstone Municipality on July 8th 2021.

Thank you for the opportunity to speak at this hearing.  My name is Bill Massey and I have led a group called the Concerned Citizens of Grosse Isle in our struggle with a hog barn in our community.  I have written a book called Of Pork & Potatoes that chronicles the events of the past 15 years in our community.  I’ve been asked to speak by members of your municipality and I’m hoping my remarks will be helpful.

On May 28th I received this letter from Sheri Grift, Manager – Agri-Ecosystems and Land Use. She was responding to my reply to Deputy Minister Gray which I had written on March 11th 2021. It seemed to me that the government had backed away somewhat on their position about the correct size of the operation at the colony. In essence I think what she was saying, in spite of the position the government was taking that the colony was entitled to have 1250 aus in their operation, it was still up to the municipality to hold them to 889!

Talk about being hung out to dry! I actually had to feel somewhat sorry for the municipality.

Response from Sheri Grift (Manager – Agri Ecosystems and Land Use) 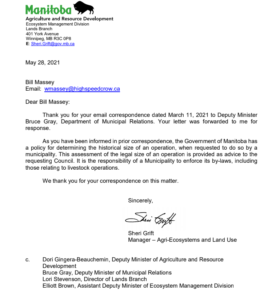 I was asked to speak at the conditional use hearing for a hog barn proposal and the municipality of Westlake Gladstone by the wife of an old high school classmate of mine.  That development was going to be very close to the Grass River and Jack Fish Lake.  Both of these bodies of water drain into Lake Manitoba close by the Sandy Bay Indian Reserve where several thousand people live.  I have fond memories of the Grassy River that ran close by Glenella where I lived as an adolescent.  I talked about an incident in my book where my car ended up in the Grassy.  I drove up to Gladstone to present to the council in the evening.  I have included the text of my presentation.

Thank you for the opportunity to speak at this hearing.  My name is Bill Massey and I have led a group called the Concerned Citizens of Grosse Isle in our struggle with a hog barn in our community.  I have written a book called Of Pork & Potatoes that chronicles the events of the past 15 years in our community.  I’ve been asked to speak by members of your municipality and I’m hoping my remarks will be helpful.

I want to begin by describing the issue of odor that our community experienced.  People have been unable to enjoy their properties or care for their yards because of the smell.  Some of them had even confined themselves to their homes.  Others had disconnected fresh air intakes on air conditioning units to attempt to minimize the odor.  People without air conditioning and with young children were particularly hard hit.  We realized what we were up against on one very cold day putting up Christmas lights on the outside of the house, the light southwest wind carrying the smell from the barn.  It was extreme, to say the least, and felt acidic in your nose and throat.  We were driven indoors and had to wait until the wind shifted the next day before we could finish putting up our lights.

I just heard a news item in the media that stated that morale among staff in Conservation was very low and the government was having trouble filling positions.  That does not surprise me in the least. It is common knowledge that former conservation officers have suggested that their role in the department was to help the producer find their way around the regulations.  There have been a number of conservation people who have gone over to the hog industry and the pork council over the years, the former head of the Pork Council being one of them.  I would seriously question the validity of the technical review and get an outside opinion if I were you.  Just recently at Landmark Manitoba, the technical review gave the green light to a development ½ mile outside the community!  Landmark is a town as big or bigger than Gladstone. How can that be valid in anyone’s mind?

I want to talk about the social costs of a development like the one you are considering.  This developer is not from the community.  They have no allegiance to the people who live there.  Its one thing when the producer is a local person and has relationships with the people living around the barn, but when that is not part of the process, it becomes much more difficult for the community to deal with this problem.  These corporations usually offer minimum wage and local people usually won’t work in these unhealthy situations.  We know of situations in the province where workers are brought in from third world countries to work in these barns. I feel these people, because of their circumstances, are being taken advantage of and that does not sit well with me or anyone concerned about human rights.

In our community there were people who supported the idea of a hog barn and there were those of us against it.  This causes serious conflicts among local people. This has been a problem in most communities where hog barns have been built.  It got to a point in one community, where children of people opposed to the barn were being bullied at school.  Some people were forced to sell out because they could not stand to live in the shadow of the barn.  When it comes to selling, we know that if you’re anywhere close to a hog barn your property values may fall as much as 50%.

I grew up on a small farm near Kelwood, Manitoba in a friendly and helpful community.  As neighbours we looked out for each other and tried to help out where we could.  I do the same today and that is one of the reasons why I took on the leadership of my group to try to maintain that care and concern for my neighbours.  We’re used to that attitude and we’re not used to a corporate factory farm entity that comes into our community and creates all of this conflict and unhappiness.  This is a foreign consortium proposing this development.  The profits will go to another country while we’re left with the conflict, the pollution and the smell.

This government passed changes to the planning act called Bill 19.  In that bill they gave a government appointed body, the Municipal Board, the power to overturn municipal decisions. This is an assault on Democracy in this province. Don’t let that influence you in saying no to this development.  This government and any who follow need to understand that we do not want this industry as it’s structured now, in our communities.  Do the right thing and turn down this application.

I have appeared on CTV Winnipeg and talking about my book and the initiatives which I have taken about the Hog Barn issues in the rural communities.

It is memoir that is actually two main stories in one.  Bill has not only managed to blend both in a delightful and telling way, but also to bridge between the past and present until they finally converge in the last chapter.  Bill takes us through his life journey and like a tapestry, time and space are woven together in a blend of nostalgia and reality.  Bill’s personal story explores his life growing up and working on farms in rural Manitoba and about he and his community’s more than 15 year struggle against business and bureaucracy at a number of levels. It’s about the influence of his grandfather, the love of his sister, and his dedication to family, friends and community.

Of Pork and Potatoes: Manitoba Author Bill Massey writes about growing up on the farm and the problems of industrialized hog farming

Host Chris Wolf had the pleasure of chatting with Author Bill Massey about his memories of growing up on the farm and the problems with large scale hog farming.

Author Bill Massey has had a multi-faceted life. He is a farmer, educator, and advocate. Throughout his teaching career, he has been an advocate for survivors of child abuse, and as a farmer, he has been a very outspoken voice against large scale industrial hog farming.

Stonewall Tribune published an article about me on their newspaper 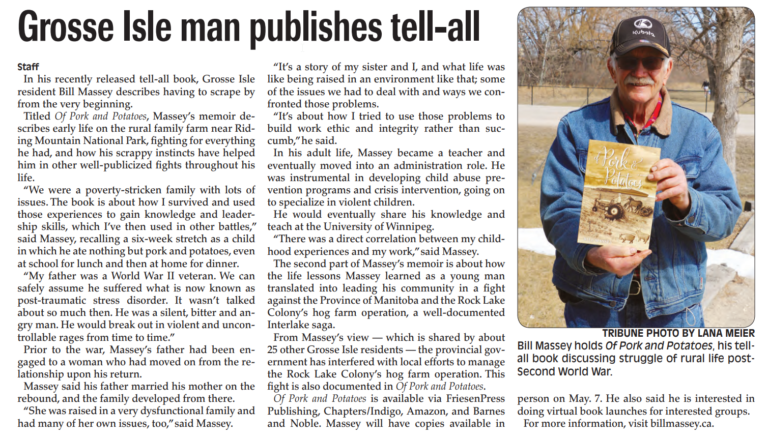 In his recently released tell-all book, Grosse Isle resident Bill Massey describes having to scrape by from the very beginning.
Titled Of Pork and Potatoes, Massey’s memoir describes early life on the rural family farm near Riding Mountain National Park, fighting for everything he had, and how his scrappy instincts have helped him in other well-publicized fights throughout his life. Read more on the Newspaper, Page Number 15.

Impacts of noxious odors and water contamination.
What can be done?

Hog Watch Manitoba is a non-profit organization, a coalition of environmentalists, farmers, friends of animals, social justice advocates, trade unions and scientists. We are promoting a hog industry in Manitoba that is ethically, environmentally and economically sustainable.

Bill Massey found the people who gave him space to move forward, committing to hard work, upholding his integrity, and above all. Never giving up, he managed to survive and use his skills to help others, becoming a teacher, principal, and advocate for disadvantaged children.